The four glasshouses at Bicton Gardens have been designed to re-create the natural environment of plants from different continents.

One of the world's most attractive garden buildings, the Palm House was built in the 1820s to a daring curvilinear design, using 18,000 small glass panes in thin iron glazing bars. It contains many rare and beautiful palms, which make a romantic setting for the civil marriage ceremonies we are able to hold in this historic building.

Lush foliage and exotic blooms abound in the Tropical House, home of the Bicton orchid (Lemboglossum bictoniense), named after the Park where it first bloomed in 1836.

The Arid House features some of the world's strangest plants, among the cacti and other succulents growing in a naturalistic desert landscape. 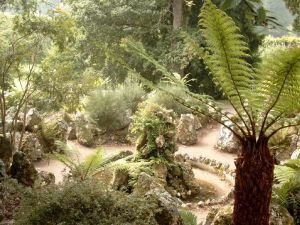 Steeped in history and romance, the Palm House is one of the world's most beautiul garden buildings. Dating from c.1825-30, the Bicton building is about 20 years older than the Palm House at the Royal Botanic Gardens at Kew, which was completed in 1848. Bicton's Palm House is smaller than Kew's, but, it is the second largest in Britain. Rear curtain walls are brick with limestone coping and plastered on the front, the terrace walls are local stone rubble topped with brick; the Palm House is cast iron framed with glass walls and roof; the greenhouse has brick and limestone ashlar sleeper walls with timber-framed superstructure and glass walls and roof. Domed Palm House faces south-west with main section projecting forward at right angles from rear wall. It has a rounded end.

Either side are lower and shorter wings along the walls with quadrant walls and half-doomed roof against the rear curtain wall. To the right (south-east) the curtain wall continues to meet the back wall of the Orangery.

It is interrupted by the gable end of a greenhouse. To left (north-west) the curtain wall extends a short distance before returning forward and containing an arch to the Pinetum beyond, then ramping down to ground level and serving as the curving retaining wall of the terrace in front of the Palm House. Behind the Palm House the wall rises in curves with steps between following the lines of the glass roofs.

The Palm House itself has a cast iron frame. It has low outer walls and tall curving vaulted roof. The wall plate is a curving girder with a simple moulding and is supported on a series of rectangular-section iron posts. The walls have vertical timber glazing bars and there are glazed timber-framed doors at the ends of each side wing.

The roof has cast iron glazing bars. There are no horizontal glazing bars; instead the hundreds of small glass panes have convex lower edges each overlapping the one below.

In each of the side wings there are 2 tall and slender cast iron columns supporting the vault girders. They are circular in section with bulbous foliation on the bases and foliate caps. 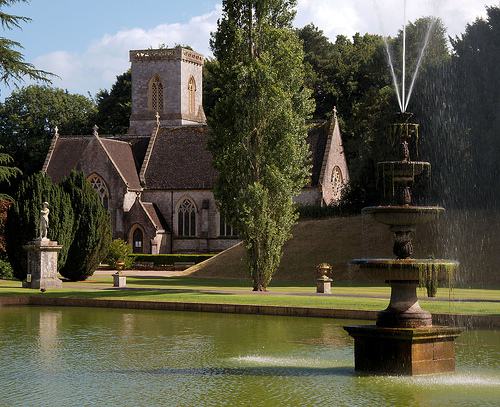 The top of the rear wall, behind the central dome, contains a series of louvred ventilators worked by chains. The only furniture is a single terracotta vase on a plain stucco pedestal and more line the path outside. The gable end of the greenhouse to right of the Palm House has limestone ashlar sleeper walls flanked by corner piers with soffit moulded caps.

The central double doors (panelled bottom and glazed top) at the head of a flight of steps flanked by low rendered retaining walls. On the top of each are cast iron statues of sitting dogs.

The glass walls have glazing bars and the upper lights have elliptical heads. The Palm House is stunningly beautiful and most impressive but also a very early example of an iron-framed glass house.

Furthermore it is set in the finest landscaped gardens in Devon and forms part of an attractive group of buildings with the Orangery the features of the Italian Gardens and the Church of St. Mary.